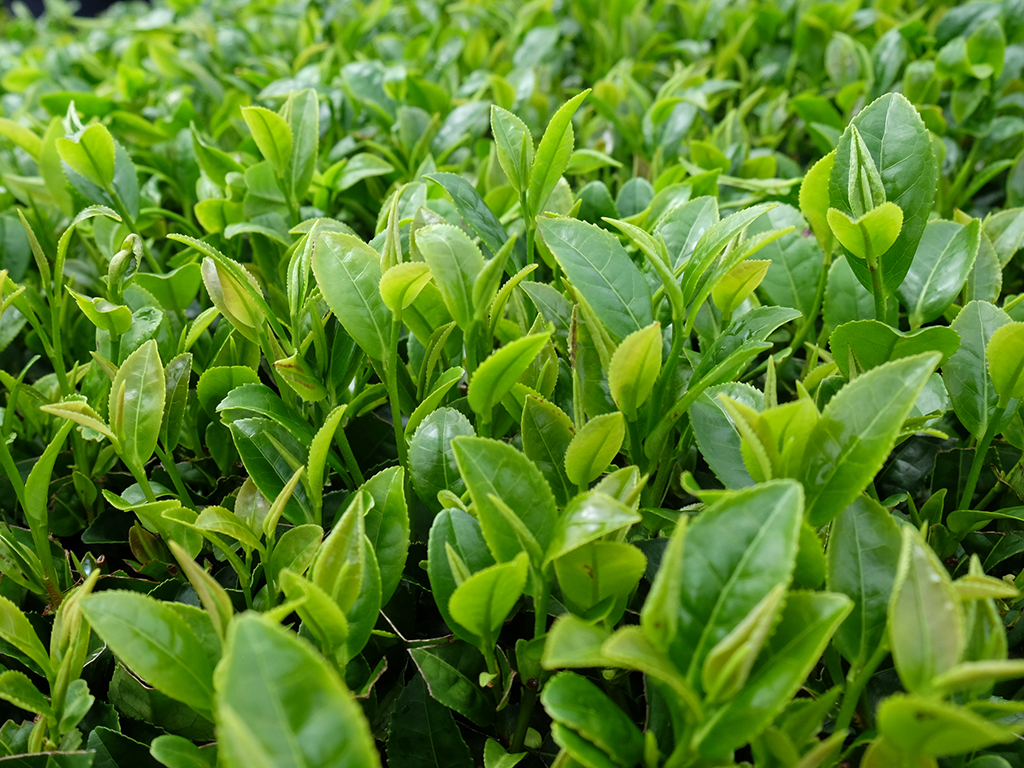 Chiran is a famous tea region in Kagoshima, second largest tea producing prefecture in Japan. In Chiran tea may have been cultivated since Kamakura times, but the production really picked up at the beginning of Meiji (late 19th century). After the second world war even a kamikaze airport in Chiran got converted to farming land for tea.

According to Chiran Tea Industry Promotion Council now Chiran makes about 12,000 tons of tea per year. That is almost 50% of Kagoshima tea production and about 15% of all Japan tea production (Other important tea producing areas in Kagoshima prefecture are Kirishima, Kagoshima, etc.).

Because of the favourable climate, Chiran and the whole Kagoshima prefecture can harvest up to 5 times per year. Chiran is also really lucky with the fertile soil, due to a nearby active volcano Sakurajima that routinely splashes ashes all around it.

Unlike other tea regions, where Yabukita is dominant cultivar, Chiran has much more variation and Yabukita here makes only about 27%. The main cultivar in Chiran is Yutaka Midori, that accounts for 42% of all Chiran tea. Other common cultivars are Asatsuyu, Saemidori and Okumidori.

Chiran is also lucky with the flat land, as most of its tea fields lie close to the seaside. In most cases tea here can be harvested with man-driven harvestings machines, that are more productive and efficient compared to other harvesting methods.

Tea produced in Chiran (as well as other areas in Kagoshima) is mostly deep steamed, that allows quicker extraction of flavor and colour components. Even tea steaming machines here look different than, for example, in Kyoto. Tea steamers here are usually flat with steam flowing on both sides of the tea leaves.

On my trip to Chiran in May 2018, I could visit two producers here: Haru Ichban and Oritaen.

Haru Ichiban was established in 1968. Currently it is led by third generation tea farmer -Yamaguchi-san. He grew up in a tea producing household, went to study tea farming in Shizuoka and now wants produce tea from some unique tea cultivars.

Today Haru Ichiban mostly operates as a tea factory, but they also manage a tea farm to produce their tea. In the good days they oversaw 50ha of tea land farmed by 30 tea farmers. As in other tea regions, the population in Chiran has been aging and decreasing. Over the years a lot of older tea farmers have retired and today Haru Ichiban manages about 35ha of tea land farmed by 11 farmers. Because of the labour shortage in Japan, they also get help from abroad – they have hired workers from Philippines to help with tea production.

The tea made by Haru Ichiban is mostly sold in Japan, either through their own tea shop in Chiran or in a sea port gift shops for cruise customers. They also sell tea on the internet through their online shop.

The tea produced at Haru Ichiban is made conventionally. Yamaguchi-san says he doesn’t like dealing with insects in tea, so organic tea is not for him. However, he has eco farmer certification, so he uses as little chemical substances as possible.

Most of the tea at Haru Ichiban is blended, where Yamaguchi-san creates his own unique combinations of the cultivars he has. The common cultivars at Haru Ichiban tea farms are Okumidori, Asatsuyu and of course Yabukita.

In addition to tea production and sales Haru Ichiba also offers tea experiences. If you visit them you may be able to take part in their Japanese green tea or black tea production activities.

Oritaen, currently led by the third-generation tea farmer Orita-san, is another tea producer I got to visit in Chiran. It was started in 1965 by Orita-san’s grandfather. At the beginning they were producing Japanese black tea, but as the demand for black tea decreased, they gradually transitioned to making Japanese green tea. Currently, Oritaen manages around 40ha of tea land has 30 people to support their operations.

The popularity of Oritaen tea has grown over years, and recently is especially high in demand abroad. One of Orita-san’s sons, who graduated from Tokyo University and studied abroad in the US, has returned to Chiran, to help his father with international sales.

Tea produced here is grown organically. Orita-san feels strongly about organic tea. Because of health issues caused by pesticides Oritaen started organic tea production in 1974. However, currently only 10% of tea produced at Oritaen has organic certification. 90% is made organically without supporting documentation, as Orita-san believes they have built a strong brand and can explain it directly to the customer.

Oritaen has about 10 cultivars that they blend to create unique tea products. Some of the common ones are Yutaka Midori, Okumidori, Yabukita. However, the strongest for organic tea productions, Orita-san says, is Kanaya Midori.

It is also interesting that tea produced at Oritaen is super-deep-steamed. Tea leaves at Oritaen factory are treated with the steam at as high as 350°C. The reason for that, Orita-san says, is that they want to produce tea as a health supplement, where super-deep-steaming allows a quick and easy extraction of beneficial components. If one tries to brew Oritaen tea, they may describe it more as a broth than a tea, as it becomes really dense and green.

Until recently Oritaen mostly produced Sencha, but as there is a growing demand for Matcha in the tea industry, Oritaen build a tencha factory in 2017. As of now they have started producing cooking grade Matcha and in future hope to install Matcha stone-mills for drinking grade Matcha production.

This is all for now about Chiran tea. Check my tea articles to learn about other tea producing regions in Japan.