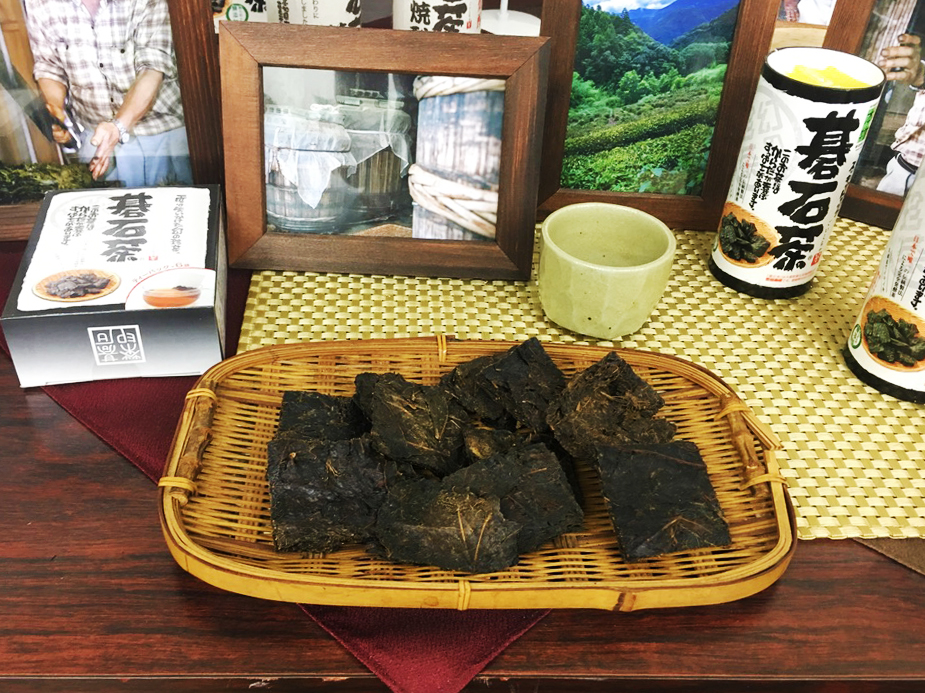 Puerh – a fermented Chinese tea, has grown really popular in recent years. It may be a surprise that Japan has some fermented teas too. One such tea is Goishicha – a fermented tea from Otoyo town, Kochi prefecture.

Story says that Goishicha (碁石茶) may have been brought to Kochi from Yunan in China around four hundred years ago. Back in those days it was used to trade for salt. It is also interesting that it was used more for food (making rice porridge) than drinking. In seventies, however, it almost went extinct with only one farmer remaining to make it. Today there are 7 tea farmers in Otoyo town, who have created Goichicha association and are preserving the tradition together.

Yoshimura-san took us to his tea field at the foot of the mountains in Otoyo town. The tea field is just about 10 years old and its cultivar is Yabukita (others may use a native mountain tea plant called yamacha). The harvesting season for Goishicha is usually in the middle of June. Without harvesting the first flush in spring, tea shoots are left to grow taller and hardier – and the tea fields often look a little wild just before the harvest.

When ready, they are often harvested with a knife sickle almost to the roots of the tea plants. Some farmers may also use tea trimming machines that resemble lawn mowers. Yoshimura-san also told us that the tea fields for Goishicha are usually grown organically (even if not certified yet), as agricultural chemicals would affect fermentation.

After harvesting, the tea branches are steamed for 2h-3h. Then leaves are removed from the stems, laid out on the floor and covered with bamboo mats for the first fermentation. For the second fermentation they are placed in cedar barrels and pressed with heavy stones. About two months later, tea is taken out of the barrels and cut into 4cm squares. These are then placed on bamboo mats outside and left in the sun for 3-5 days to dry.

The yearly production of Goishicha, though, is fairly small – just about 1t – 1.5t. There are just a few farmers making it and as it is registered Authentic Local Specialty (Honba Honmomo) it needs to be produced the traditional labor-intensive way. Therefore, the price for it is fairly high too – about 5,000yen/100g. Currently Goishicha is mostly sold domestically, but its representatives have brought it to exhibitions and fairs in Paris and Milan, so the curiosity in Goishicha abroad may grow in future.

There is also quite a lot of research into the healthy properties of Goishicha from Kochi University and Tokyo Agricultural University. Until recently most test were performed on rats, but since about two years ago clinical trials have been started on people. Not only is Goichicha good for the digestive tract, but some evidence also points that it has influenza preventative qualities and aids in cholesterol breakdown.

To make this tea, you’d want to boil one square of tealeaves in a kettle with about 2l of water for about 10min. It will brew to a brownish color and provide a somewhat sour pleasant taste. Highly recommended, if you have a chance to try it.