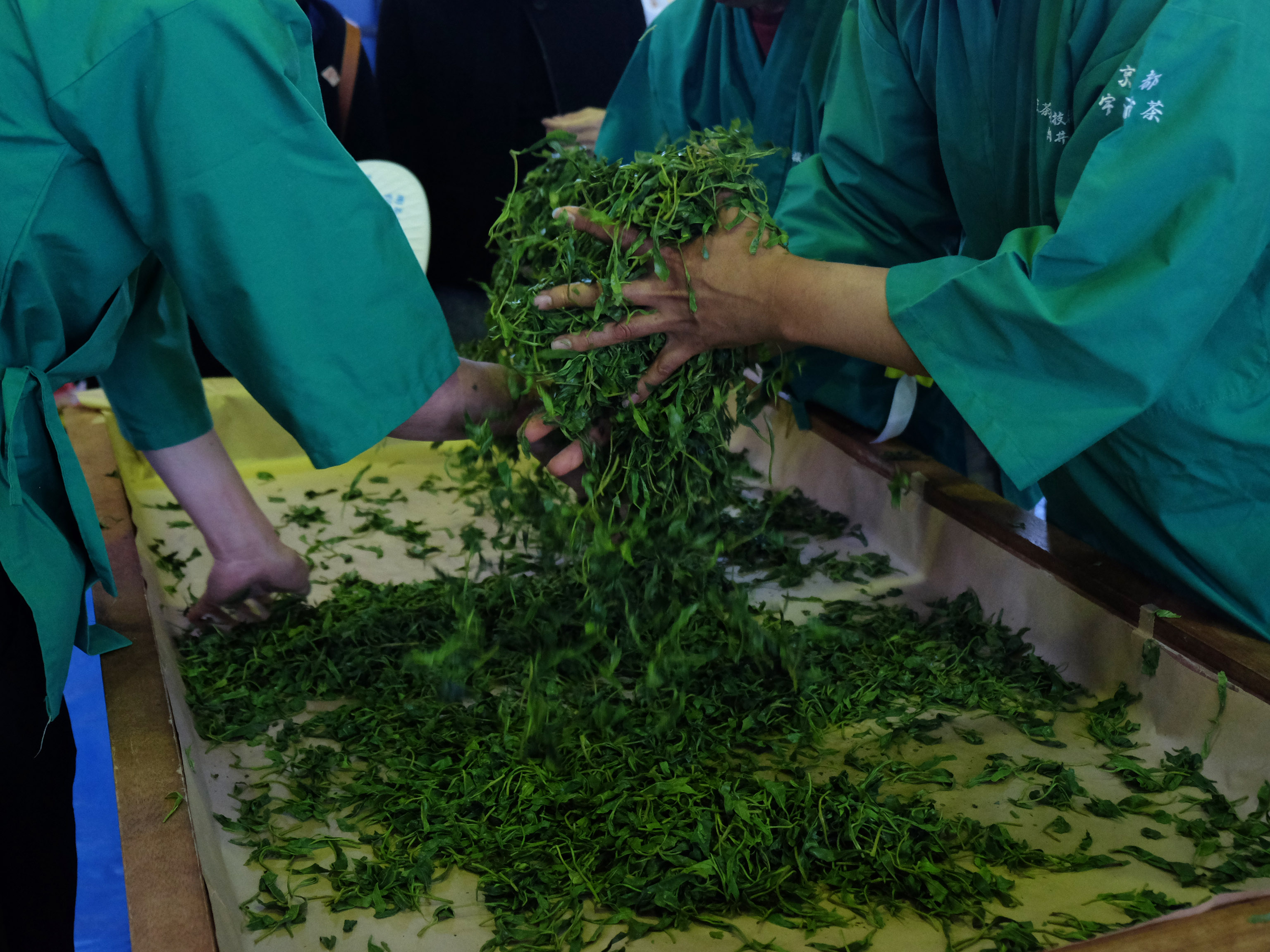 In the middle of November, the annual National Japanese Tea Hand-Rolling Competition took place in Yame, Fukuoka. It was 22nd time the competition was held and 31 team from different tea regions competed in it.

Before the national competition each tea producing region usually hold a regional competition to select 1-3 teams to represent the region in the national competition. Some smaller regions may only have a few teams, some bigger regions would have a larger number of teams. In Kyoto, for example, there usually are around 10-12 teams competing. Shizuoka, the biggest tea producing region, often has 30 or more teams competing. This year regions with the most teams – 3 each, were Shizuoka, Mie, Kyoto, Aichi, Fukuoka. On 14th November all of them gathered in a tea center in Yama, Fukuoka.

The competition starts early in the morning and most teams arrive around 8am to draw their number in a lottery and start preparing the rolling tables – hoiro. It is not easy to gather 31 hoiro in one place – some of them were almost brand new some were long-used and worn. The lottery decides which team gets which table.

Before the rolling begins each team inspects their table and fixes up any cracks or tears in the washi paper surface they can find. Then one member of the team goes to the tea leaf lottery and gets 4 packs of tea leaves – altogether about 4kg.

Usually spring tea leaves are used in national competition. These tea leaves are harvested in spring and then frozen to preserve until the competition day. Because the tea leaves are frozen, they first need to be defrosted, dried from extra moisture and warmed to body temperature before the actual rolling begins.

There are 6 different rolling steps and the whole process takes about 6h.

The teams are typically formed of 3 members and most rolling steps require at least two of them present. So at times in a rotating manner one team member can have a short break.

It is the best if there is a leader in the team, who sets the pace and gives a rhythm. While the majority of the time tea leaves are handled individually, eventually the mix of all is judged and evaluated. So if rolling styles of the team members were very different, the result would not be cohesive and uniform.

Once the tea leaves are dried they are passed onto the judging committee, who evaluates dry tea leaf shape and colour, as well as the colour, aroma and taste of the brew. The winner team is normally awarded full points – 200, while all the following teams get points deduced for the flaws.

This year the winner was Wazuka team from Kyoto prefecture. In 19 years of participating in the tea hand-rolling competitions this was the 1st time for Wazuka to become Japan’s No.1. As a member of Wazuka Tea Hand-Rolling Preservation Association I am grateful for an opportunity to come cheer for Wazuka team and celebrate their victory.