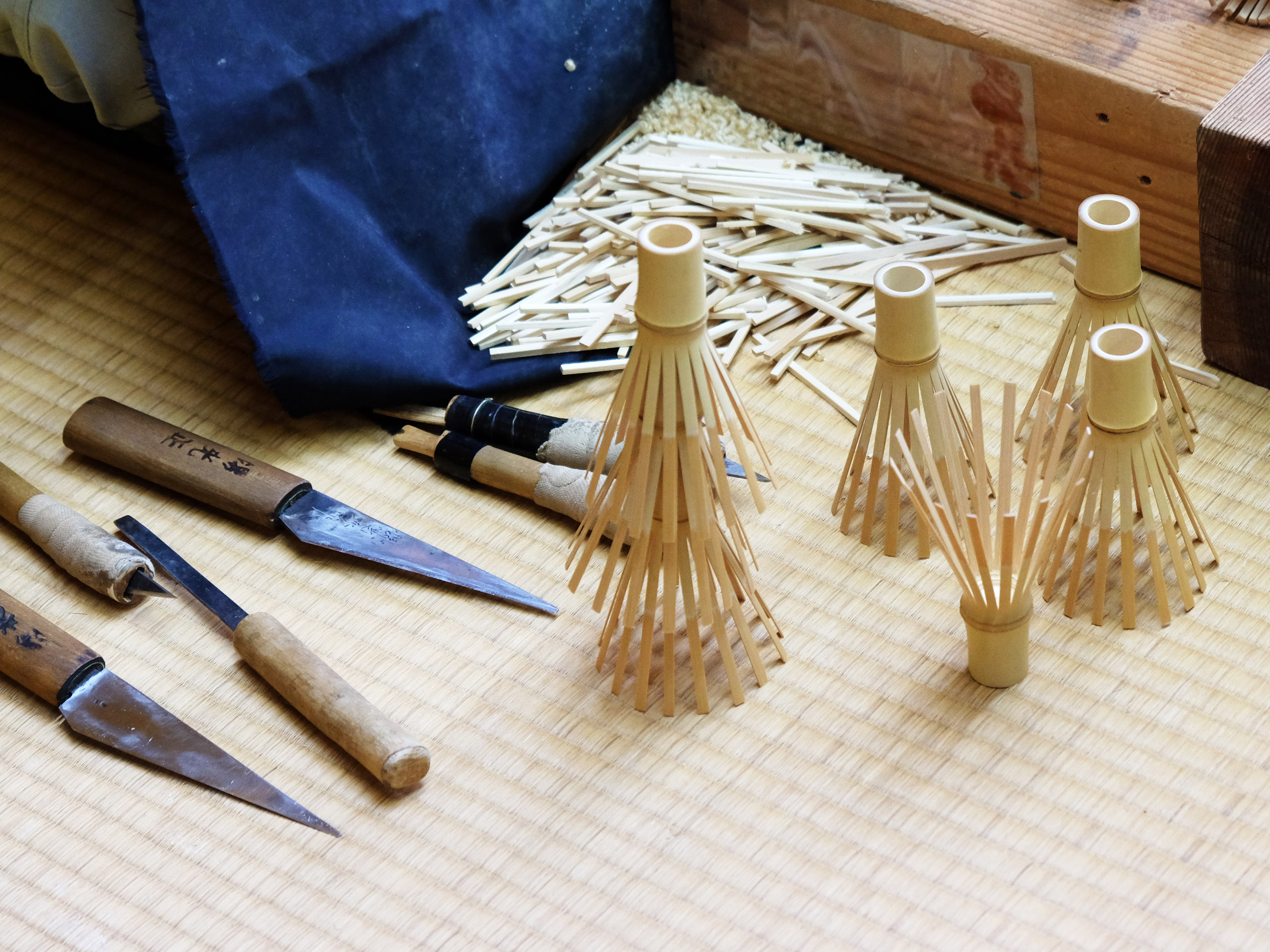 Japanese tea ceremony is known throughout the world. The ceremonial preparation of tea includes some very traditional utensils, one of which is a bamboo whisk called chasen. It is made from one piece of bamboo, that is split and carved into a number of fine tines.

It is little known that around 90% of chasen in Japan come from one town hidden in the mountains – Takayama town in Nara prefecture. The town has been making chasen for around 500 years, since the times of Sen no Rikyuu, when tea ceremony became popular in Japan. Even to this day Takayama chasen continue to be made by hand and it can takes decades until the craftsmen become proficient at their craft.

There are several kinds of chasen. They can differ in colour depending on the tea school that uses them. In Urasenke tradition chasen are usually light yellow in colour. Omotesenke school normally uses darker brown chasen, whereas Mushanokojisenke school tends to use naturally spotted chasen. The number of chasen tines can also tell us whether it is meant for thick tea – koicha, or thin tea – usucha. The larger the number of tines the more finely the tea can be whisked, therefore chasen with more tines are usually used for usucha and chasen with less tines tend to be used for koicha. The number of tines can range from 16 all the way to 120. Needless to say, it requires a lot of work and attention to carefully carve the tines of chasen.

Bamboo used for chasen are usually cut in late autumn, then boiled and dried in the sun. It can take several months or years before the treated bamboo is carved into chasen. The carving itself is a very precise process, that takes 8 distinct steps to complete. First the upper part of the bamboo is divided into 16 pieces. Then the inside layer of the bamboo is taken out. After that bamboo is cut further into the desired number of tines and soaked in hot water to soften them. From there the tines are carefully thinned until they are as thin as paper. Then the thread (usually black in colour) is weaved at the base of the tines to spread them out. Finally, the edges of the tines are curled and arranged beautifully to finish. It is a rather time-consuming process and even skilled craftsmen can make only a few per day.

I had a chance to see the chasen making demonstration at a Takayama Bamboo Garden Museum, that has an interesting exhibition on different kinds of chasen and other bamboo utensils. On that day there was also a special event in town – ‘Expressing Gratitude to Chasen'(高山茶筌 感謝祭). Held in March every two years the event includes a tea ceremony and a special chasen burning ritual. Made from bamboo chasen are fragile and cannot last long. Knowing how much work goes in their productions, though, simply throwing them away gives a heart ache. The special ritual, where Buddhist monks burn chasen in a temple while saying prayers, is held to express gratitude to chasen. That is a very beautiful and spiritual occasion.